Irrespective of the law, wearing a bike helmet is always a good idea. Studies have found that the majority of bicycle-related accident deaths occur due to head and brain injuries. A helmet can save you from traumatic head and brain injury, fractures of facial bones, and can even save your life. According to the Insurance Institute for Highway Safety’s statistics, helmet use effectively reduces life-threatening head injuries by 50%. The same study found that other injuries were reduced by 33%.

Fun Fact: Did you know that in 1990, Australia was the first country to introduce a uniform law stating that wearing a helmet was mandatory for all age groups of bicyclists. The police enforcement of the law started on July 1, 1992. 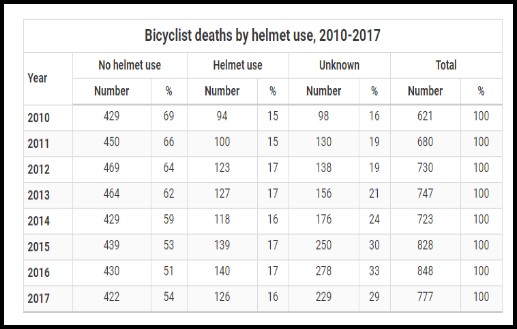 History and Evolution of Bike Helmet Laws in the U.S.

The idea of personal liberties has always, one way or the other, affected the debate about public health in the U.S. Differing state laws regarding bicycle and motorcycle helmets reflect the conflict, despite helmets proving time and again to save lives. The past three decades mainly have seen some ups and downs regarding formulating and implementing laws for riders of all age groups. It is, however, imperative that helmet wearing is encouraged as an ethical responsibility, even where there are little or no laws.

Meanwhile, only 21 states and the District of Columbia have mandatory laws for wearing a helmet while riding. Thirteen states have no law either at the state or at a local level. These states include Arkansas, Colorado, Idaho, Indiana, Iowa, Minnesota, Nebraska, North Dakota, South Dakota, South Carolina, Utah, Vermont, and Wyoming.

A Brief History of Helmets

A machine called Velocipede was the first-ever form of a bicycle in the early 1860s. The bike evolved with time, and so did the need for a safe ride. By the late 1880s, there were riding clubs, and bicycle riding was considered a sport. The high wheel bicycles of the time were fun to use, but they came with the danger of falling from a tall height. In fact, the term “taking a header” came for cyclists who would fall from the high wheel bicycle and get injured.

In the 1920s, the use of helmets started with motorcycle driving and racing. Sir Hugh William Bell Cairns, an Australian neurosurgeon, coined the idea of helmet use for soldiers during the Second World War. After the famous T.E. Lawrence died from succumbing to head injuries from a motorcycle crash, Sir Cairns was deeply affected. He saw that cyclists and motorcyclists were running an unnecessary risk and endangering their lives. Subsequently, his long study and research paved the way for the use of helmets for both military as well as civilian bike riders.

The Bike Boom of the 1970s and Helmet Safety Standards:

Most Americans took up cycling as a sport during the bike boom of the 1970s. Consequently, the ratio of accidents and head injuries increased. The Snell Foundation was the first to recommend professional helmet testing after the death of Pete Snell. The research and data collected from all across the United States showed that none of the helmets during that time were effective against head and brain injuries during a crash.

The Origin of Helmet Laws:

Bell Auto Parts came up with the first real and safety features packed helmet in 1975. It was the beginning of the need for developing safety standards for modern helmets. It was also the same time when the government started pushing states to make it mandatory to wear helmets for safety. In 1987, California was the first state to pass a helmet safety law for riders under five years of age.

To date, there is no federal law that requires wearing a helmet by riders. In 1967, the federal government started requiring states to pass helmet laws as an incentive to qualify for highway funds and federal safety programs. By the end of 1970, almost all states had laws that required riders to wear helmets. On the other hand, some states began the process of implementing and then repealing the same laws. Michigan was the first state to do exactly that. In 1968, there was a pattern of amending and repealing helmet laws.

Here is a look at the different states and the laws they have for bicycle helmets. The list below only shows states that have helmet laws in place and the age limit they apply to. If you do not see your state, that means there are no mandatory state-level laws at the moment. 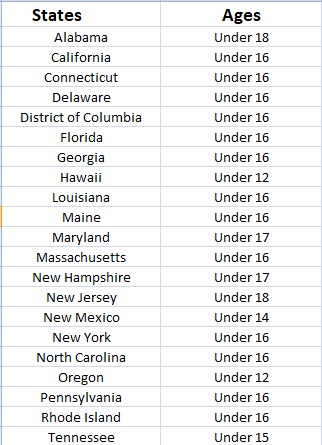 Effectiveness of Laws for Bicycle Riders:

From all the bicycle-related deaths, head injuries are the biggest culprit and sadly these are also possibly the most preventable. There are researches and studies carried out by both government and private organizations that have proven the effectiveness of helmets in reducing fatalities. The enactment of legislation that requires the use of helmets for kids has saved numerous lives.

The laws, however, are not rigorously imposed, and there are no hefty fines if caught. There are at least five states that have just a verbal warning in case of violation. There are also very few states that require all age groups to wear a helmet.

You May Also Enjoy: Best Kids Dirt Bike of 2020 – Tested &Reviewed By Experts!

According to a study conducted by Dr. Gregory B Rodgers, Directorate for Economic Analysis, U.S. Consumer Product Safety Commission, helmet laws have significantly increased the use of helmets by children. The study also showed that the probability of regular helmet use increased by 20%. However, laws are only truly effective when combined with education and proper implementation. With all this research it is easy to see how important wearing a bike helmet truly is for our loved ones.

Fun Fact: After the implementation of helmet laws, the state of New York reported a decline in brain injuries induced by bicycle-related accidents from 464 to 209 from 1990 to 1995.

The data and statistics suggest that implementing helmet laws has not only increased the use of helmets in children but has also significantly decreased the number and severity of traumatic injuries. A helmet is as important as using seat belts. It can be the deal-breaker when it comes to saving a life, but you must also make sure your bike helmet fits properly. However, these laws can only be more effective when combined with education and awareness. Nevertheless, there is still the need to formulate a universal law in all countries for riders of all age groups. 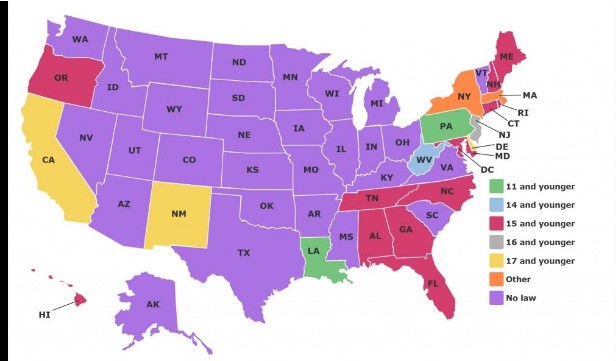 Compare All Bike Helmets For Kids

In the market for a Bike Helmets For Kids? Check out this guide comparing the features of some of the best ones in our opinion.

Other Articles You May Enjoy

Best Potty Training Seat in 2020 – Great Options for Your Child

Ever since the day our children are born, we have to provide for them in so many ways. Among all those things, some can truly be stressful for parents to deal with. One of those things is potty...

Since the first bike was invented, a series of upgrades have been made to make bikes more innovative and productive. Every bike used to have its own specialties, such as bikes for racing,...

The history of electric bikes goes back about 20 years, and somehow, they managed to become a significant part of the bicycle industry. With a simple design, like that of a bicycle, and electrical...