Children around the age of six experience a significant life change as they begin to read. Reading drastically expands their little world by adding new imaginations and fantasies. Around this age, boys begin to question and interact with things they previously perceived as hidden from them. There can be many to choose from the best gifts ideas for 6 year old Boy. As the boys of this age begin to understand some of the basic science of how things in this world operate. So, a lot of science kits and experimental toys can be useful to a child this age.

If you are not sure what kind of toys your boy likes, take him to a toy store to see what toys attract his attention.  This should give you a pretty decent idea of what his interests are at this stage in his life.

Short on Time? Click Here for Our Top Pick!
Also, you could derive some gift inspirations from the regular cartoons or movies that he likes to watch. Nowadays, toy stores carry many different ranges of movie and cartoon merchandise and even clothes. However, before you go shopping for a six year old boy, stop and think about how new toys could help him gain new skills and knowledge. A majority of toys provide some kind of learning opportunity for children. Look for toys that engage your child’s imagination, senses, thinking and basic reflexes.

Children around the age of six are usually very eager to learn something new about things that surround them on daily basis. Simple things like a new shape, texture or even taste can stimulate their brain in the right way. Toys such as building blocks and Lego pieces can help a boy practice his coordination and logical thinking.

Zoob RacerZ Car Designer enables your boys to build up to 3 different cars at one time; boys mostly use the cars to race their friends! With their unique design, the high quality, food-grade rubber tires function like gears. It is easy to build and assemble the cars using the instruction booklet that comes with the box or solely based on the imagination of the child.

The box contains 76 different pieces that come in a variety of colors. These items include 12 rubber wheels and 2 instruction booklets that guide children in building the Supersonic Stinger and the Gear Getter. We recommend the Zoob Car Designer set for children older than six because the box contains lots of small swallowable pieces.

The Zoob set is different from other similar car designer sets on the market. This toy has lots of gears, joints and even axels that are easy to put together as they snap, click and pop into place. Boys that are six years old can design cars that they can actually play with, because the parts extend, rotate and spin, thus, offering lots of flexibility during 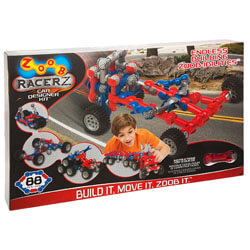 NewisLand Blaster Gun is made from durable, reinforced and solid plastic that will not crack if dropped or hit on hard surfaces. Your boys can have a blast without worrying of scratching or breaking it. This blaster gun is capable of carrying up to six pieces of foam darts at one time and the design of the gun allows for quick dart reloading.  The darts consist of soft foam and smooth surfaces that will not bruise the skin.

These darts are also compatible with other blaster guns, for example, the Nerf N’ Strike ones. The dart’s foam is eco-friendly and biodegradable. Boys can role play using this gun with their friends or family members regardless of their age as the guns design looks sophisticated and modern. Its color scheme represents the theme colors of Marvels favorite character- Captain America. 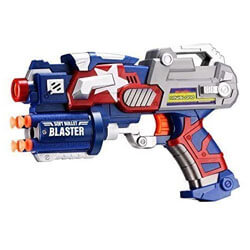 Magnetic dartboards can provide hours of entertainment and teach children eye hand coordination. Also, magnetic dartboards are perfect for protecting your walls. Your six year old boy can use this dartboard alone or with his friends and family.

This magnetic dartboard is fun for everyone regardless of their age and skill level. It can teach your children coordination skill as well as strategy and overall feeling of sportsmanship. The board’s convenient size and portability allow it to be carried around with ease. Your little one can take it with him to his friend’s place or play the darts in the backyard over the weekend. It can be hung virtually anywhere thanks to the small hook at the back of the magnetic board.

Moreover, the board has the same classic pattern, characteristics and faux cracks as the normal dartboards.  Plus, the board is very durable as it is made from balanced neodymium magnets that have great flying accuracy and are very hard to damage. The set comes in a gift box that contains a 16-inch magnetic board, six darts that are divided into two colors and a clear guide booklet. 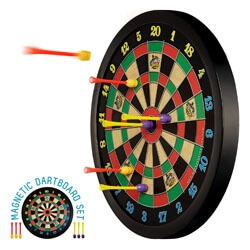 Nerf N’ Strike Blazin Bow has 3 extra big foam arrows that, if shot right, can fly up to 40 feet. The bows wingspan is close to 20 inches making the toy look incredibly awesome to young boys looking to play a bit rough with their friends.

Boys can shoot up to 3 arrows at a time and then quickly reload the gun using additional arrows from the storage compartment located at the end of the bow. Parents or family members looking to gift their six-year-old boys a toy that can sharpen their coordination and archery skills will definitely be happy with this Nerf N’ Strike Bow. Nerf N’ Strike Blazin Bow is manufactured by Hasbro, a giant in the industry of toy making. Hasbro’s standards and strict quality controls ensure that the toys are made from durable yet safe materials that can withstand years of rough play. 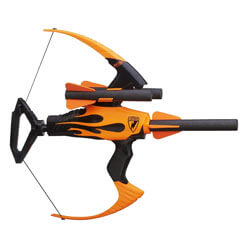 Once assembled from different puzzle pieces the T-Rex dinosaur comes to life in front of your child’s eyes and is sound activated by clapping. Moreover, it can walk and roar on its own making your boy burst into laughter. The building process can give parents much needed bonding time with their little ones. Furthermore, it is made using non-toxic wood that has been pre-sanitized and inspected to have only smooth surfaces thus eliminating the risk of your baby getting splinters in their fingers or hands.

The puzzle matching process stimulates your boy to use his deductive reasoning skills thereby stimulating his brain development. 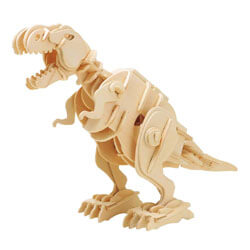 The spring is made from one continuous strand of durable stainless steel that is coiled into many rings that fold and pop open to surprise nearby individuals. The GeoFlux magic spring can be transformed with the touch of a hand into an interesting 3D sculpture of your imagination. The spring can be coiled to resemble an atom or an extra-planetary orchid.

Your child would simply love this gift as it offers so many different ways of surprising friends and classmates. Once a hand is inserted into the coil, it begins to spiral up and down so fast that it becomes one blur of motion. The GeoFlux spiral comes in a textile pouch that can be used to store or transport the 3D sculpture.  However, if the coil becomes bent or damaged-the whole 3D sculpture becomes unusable. 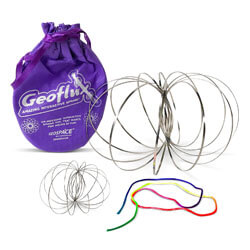 This hovering ball can glide over hard and smooth surfaces creating a spectacular sight for both the children and the parents alike. It is made from a safe material that does not contain PVC, BPA or any of the polymers. Plus, its design is completely smooth without sharp edges that could potentially damage ones toes or feet. Moreover, this feature makes it suitable to be used for playing indoors, as it will not damage the walls or the furniture.

The beautiful LED lights enable playing in the dark and give the hovering ball a pretty overall look. The downside is that four batteries power the LED lights which constantly need to be replaced or recharged. Moreover, the battery mechanism is not water-proof and this prevents the ball from being used on rainy or humid days as the mechanism is rendered useless once moisture enters the battery pod. 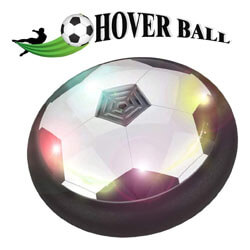 What toys to avoid when picking gift for a 6 year old kid?

Nowadays, there are so many toys being advertised and sold! Sometimes it even gets difficult to keep track of what our children already have. I avoid buying video games, because my children already spend too much time in front of the TV. Also, we avoid gifting toys that can hurt them or their friends such as powerful Nerf guns with hard darts.

In conclusion, children around the age of six years old, especially boys, have different development processes going on. Some children might be more advanced while others have yet to catch up. But, an important factor to remember is that this development is critically influenced by the environment that they grow in.

Moreover, the experiences that they go through shape their way of thinking and set a certain behavioral pattern that follows them throughout their youth and teenagehood. Six year old boys have a much longer attention span than four year olds boys. Six year olds benefit greatly from toys that have structured activities that stimulate their senses. Also, look for toys that your child can use in games that require running, kicking and jumping. These activities can better help them develop their foot and eye coordination. The above list contains several such toys, such as the LED hover ball and the magnetic dartboard. These toys are perfect for mastering throwing skills and reflexes.

The Nerf N’ Strike gun can be used in backyard games that require hide and seek techniques to find opponents. It would also require your child to run, jump and possibly climb, adding an important exercise factor into the game. With most children living a more or less couch lifestyle, I encourage such games. Lastly, I would not advise spending large sums on toys, because most children get bored very quickly with them. Instead, gift several affordable ones so that they can divide their time and interest among them.  This list of gifts for six-year-old boys should give you plenty of ideas and inspiration. 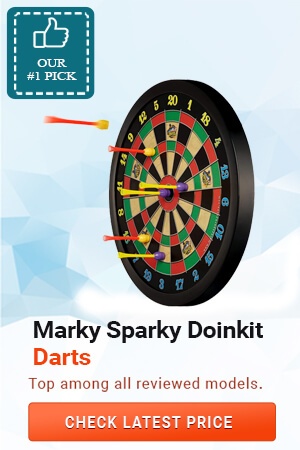